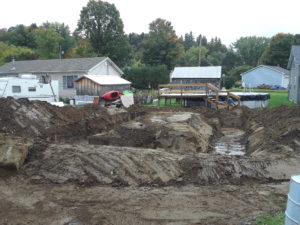 gician with a backhoe. I wish I could have stood around all day and watched him work  (thinking of the townsfolk in Mike Mulligan) as his four corners came out neat and square.

Don Thetford of Anchor Foundations has been going strong since I last saw him 10 years ago, but we took up our friendly conversation as if it had only been a week. His corners were also neat square and perfectly level. 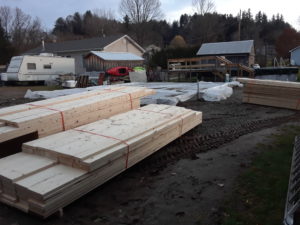 This pile of lumber was delivered in mid-November. There are enough 2×6’s for the downstairs walls, 2×10’s for floor joists and 23 sheets of plywood to cover the floor. 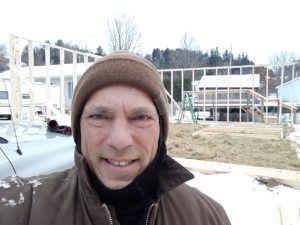 Winter has come early and set in with a vengeance.

We’ve already lost a couple of days to snow storms and had to dig out and scrape off the lumber.

Not used to the cold, it feels very cold to be framing–bad enough, it’s been awhile since I’ve used these muscles.  Somehow, you just hunker down and keep moving to keep warm. At least you don’t waste much time eating lunch… 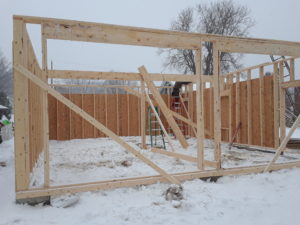 the job gets done 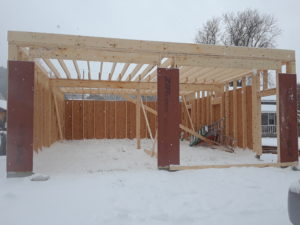 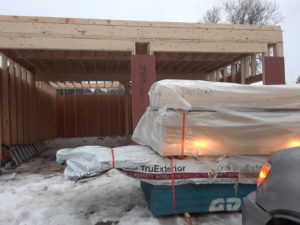 Just as the next load gets dropped 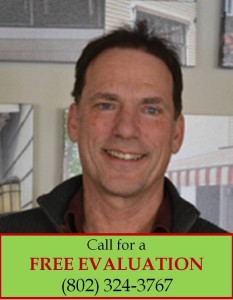 For Homeowners about the Renovation Process

Find inspiration for your revamped landscape by browsing photos of decks, patios and porches.
Find new home builders who can help you create a dream kitchen, complete with kitchen island, a large dining table set and a creative kitchen cabinetry design.
Tweets by @artisanbuilders